GETTING A BIT TOPPY PERHAPS?

The recent mini-correction appeared to end without substantial evidence of exhausted sellers followed by objective evidence of resurgent demand, which are the classic markers of a tradable bottom in our approach to risk management. The decline’s failure to purge all the weak hands, and/or would be sellers, from the mix of investors set up the potential for the sudden appearance of renewed selling, which has now occurred as the rally has shown signs of struggle as it is approaching the previous all-time high. The struggle higher seems to have given way to a breakdown on Friday afternoon. These conditions suggests an assault on new all-time highs may still be possible, but if it happens then it will likely be done in a stumbling fits and jerks type mode, as opposed to a strong and powerful bull trend higher.

We are invested in VOO and QQQ for clients, which in the current environment is a real advantage, as investors holding individual stocks are likely having to take action to keep pace with the stock indexes due to group rotation, which normally happens with the approach of major tops. Institutional investors tend to crowd into stocks that are highly liquid, and easy to own household names, which are often familiar to retail investors. Lesser known names, which often are of smaller capitalization, tend to have less liquidity as major tops approach, and then begin to roll over into bear trends, even as the indexes continue to touch new highs. Studies by Lowry Research, and others, have shown this phenomenon continues until the popular stock indexes actually have significant percentages of their holdings, which have already been in bear markets before the few remaining institutional favorites, which are attracting most of the buying, finally break down. And, given the tendency for human nature to be repetitive, this characteristic related to major top building tends to occur over and over.

It is too early to declare a major top building process has reached a point of significant danger to investors, but it is not too soon to be vigilant for the objectively measured evidence that the process may already be underway, which will eventually result in the demise of this long liquidity driven bull run. Yeah, if one pours enough fuel on the fire it will linger for a long time, and Uncle Sugar, and his counterpart central bankers around the globe, have been pumping fuel on the liquidity fire periodically since the Great Recession of 2007-2009. Recent news articles suggest they may be preparing to do so again, this time cloaked in the disguise of “negative interest rates”. So, objectively measuring the response to all this extraordinary, and continuing, fiscal stimulus will be more important than ever, as the litany of bad news being reported daily on the evening news may be in part, or wholly, offset by the central bankers pumping more fuel on the fire, while putting the cost of the fuel on an ever growing national tab.

Our job is to successfully navigate this wild financial environment, which seems to grow wilder by the day, for our clients. Volatility in the global financial system can be decried, or turned to advantage by the rare few with the training, proprietary tools, experience, and most of all courage to, like a martial arts expert, turn their adversary’s strength to advantage. In the financial arena volatility is a powerful adversary, but that power can be turned to advantage. No not by the legions of insurance sales people masquerading as professional investors, or the countless gifted relationship builders extracting excessive fees from their clients for below average performance, but by the proven in the crucible of the market few, which have the tools, skills and requisite courage to navigate the likely, and perhaps historic, volatility to come.

TATY, is shown above in yellow with the S&P-500 overlaid in red and blue candle chart format. TATY finished the week above the red zone surrounding the 140 level. However, TATY has failed to match its previous high, and appears to be tracing out a negative divergence with the price. Negative divergences can remain in place for days before they eventually result in a decline in the price, which is the usual the outcome. However, negative divergences can also disappear due to resurging strength in the indicator’s components, but this happens much less frequently.

Given the obvious negative divergence, depicted above on the TATY chart by the down sloping red line, I’m inclined to begin scaling back some equity exposure on any further rally, especially a rally which touches new all-time highs with the negative divergence still in place, or which is growing worse as the price is touching new all-time highs. Please note that banking some accumulated profits, and trimming some equity exposure, is NOT the same exercise as turning from offense to defense in client accounts. Banking some profit is just being prudent in the face of creeping weakness in a family of key strategic indicators. The time for defense would be after the appearance of a “Big Chill” warning, and that has not happened, and that process from beginning to completion is normally measured in weeks and not days.

SAMMY is shown above alone, and below with the SPXL 3X leveraged S&P-500 ETF overlaid. The SPXL three times leveraged ETF is used for reference only.

SAMMY is a valuable tactical indicator for bottoms, as it often clearly identifies strong resurgent demand after a decline strong enough to exhaust sellers, and in the process create discounts to value situations. SAMMY did not flash a classic buy signal at the recent mini-correction bottom, and for the time being is not particularly helpful. However, SAMMY has not responded vigorously to the rally in the price, and is negatively diverging with the price in like manner as TATY. If a price decline arrives, which is strong enough to exhaust would be sellers from the mix of investors, then SAMMY will become a very important tool to identify a low risk entry to put excess cash, or newly arrived cash, to work.

We had some cash available at the recent mini-correction low, but the failure of a SAMMY low risk buy signal being triggered caused us to stand aside, and not invest the cash. Given the struggling rally to date, the do not invest the cash decision appears to have been a prudent one. Near all-time highs, and with a host of negative factors emerging, we elected to be forced into buying, because of the appearance favorable objective measurements, would be the more prudent path than just acting on the need to invest excess cash. Given the relatively weak rally which has emerged, the indicators appear to have done their job by not signaling a low risk buying opportunity was at hand.

Evidence is appearing to support the case that the current rally may fail at, or marginally above, new all-time highs. I am prepared to trim portfolios of some equity exposure, and to bank some accumulated profits, if it becomes obvious that this leg of the rally may be expiring. On the contrary, if evidence emerges that the rally is gaining strength, then no action will be taken, and we shall continue to hold our equity allocation at current levels.

Clients will earn another quarterly dividend on our VOO holding by the end of September. Additionally, clients holding VOO and QQQ will likely benefit from the normal group rotation, which often occurs as stock indexes build out major tops. Investors holding individual stocks will likely begin to be penalized, as some of their stocks move higher with the indexes, even as the majority of their stocks begin to move lower, and some even into bear trends, as the stock indexes likely continue to touch new all-time highs, as institutional investors crowd into fewer and fewer highly liquid big cap stocks. Popular stock indexes tend to be capitalization weighted, so their impact on the index can be huge relative to their numbers in the index. This is why as bear markets begin the majority of stocks are already in serious declines by the time the big cap indexes finally roll over to join the majority of already declining stocks. Once the big caps roll over, then the down trend in the index tends to accelerate, which traps the unwary in the emerging new bear market. Clients reading this weekly update now know more about how major tops form than most Financial Advisors, whose real mission is to create revenue for their firms, or run the risks of being terminated!

DISCLAIMER: Optimist Capital LLC, does not guarantee the accuracy and completeness of this report, nor is any liability assumed for any loss that may result from reliance by any person upon such information. The information and opinions contained herein are subject to change without notice and are for general information only. The data used for this report is from sources deemed to be reliable, but is not guaranteed for accuracy. Past performance is not a guide or guarantee of future performance. Optimist Capital LLC, and any third-party data providers, shall not have any liability for any loss sustained by anyone who relied on this publication’s contents, which is provided “as is.” Optimist Capital LLC disclaim any and all express or implied warranties, including, but not limited to, any warranties of merchantability, suitability or fitness for a particular purpose or use. Our data and opinions may not be updated as views or information change. Using any graph, chart, formula or other device to assist in deciding which securities to trade or when to trade them presents many difficulties and their effectiveness has significant limitations, including that prior patterns may not repeat themselves continuously or on any particular occasion. In addition, market participants using such devices can impact the market in a way that changes the effectiveness of such device. The information contained in this report may not be published, broadcast, re-written, or otherwise distributed without prior written consent from Optimist Capital LLC. 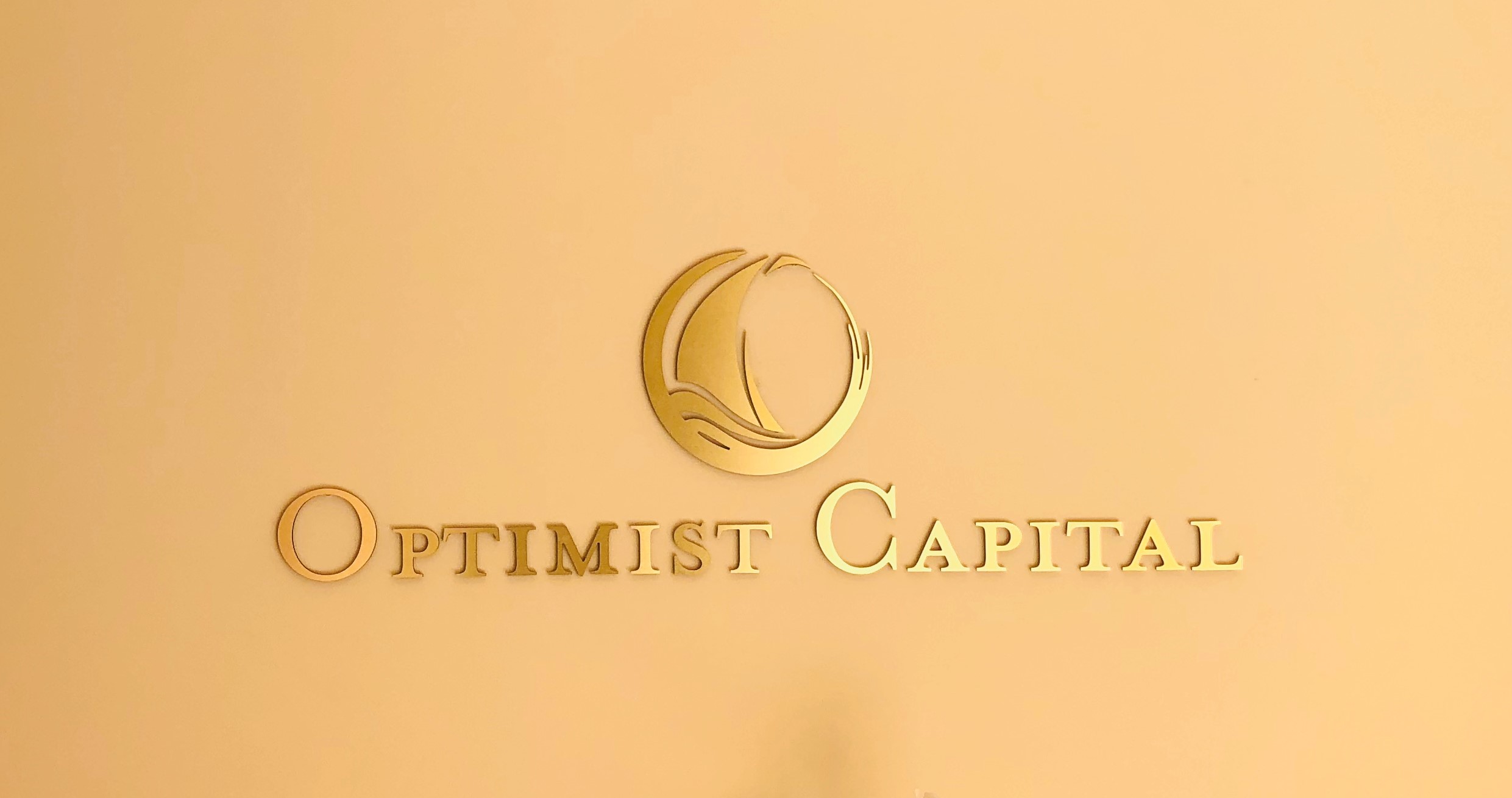